United States Attorney Mike Stuart announced the unsealing of a 69-count indictment charging a total of 12 individuals with operating a “pill mill.”  The indictment charges the owners, managers and physicians associated with HOPE Clinic, which operated as a purported pain management clinic in Beckley, Beaver and Charleston, West Virginia, as well as Wytheville, Virginia, and a related company, with conspiring to distribute oxycodone and other Schedule II controlled substances, not for legitimate medical purposes and outside the usual course of professional practice, from November 2010 to Ju

Indictments were unsealed today alleging that a group of individuals from Michigan and West Virginia conspired with one another to operate an oxycodone distribution operation in the region.

Officers from the Beckley-Raleigh County Drug and Violent Crime Unit arrested three men Monday on drug charges, including one from South Carolina, following investigations at two local motels and a house in Beckley.

CLARKSBURG, W.Va. — A number of agencies in Harrison County were involved in multiple drug busts over the weekend, resulting in the seizure of nearly $400,000 in illegal drugs. 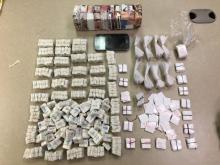 A Beckley man admitted his involvement Tuesday in a California-to-West Virginia drug conspiracy.

Velarian Sylvester Carter, 37, pleaded guilty to conspiracy to distribute more than 50 grams of methamphetamine in federal court in Beckley, according to a news release from Acting U.S. Attorney Carol Casto’s office.

He faces at least 10 years and up to life in federal prison when he is sentenced on Oct. 13.