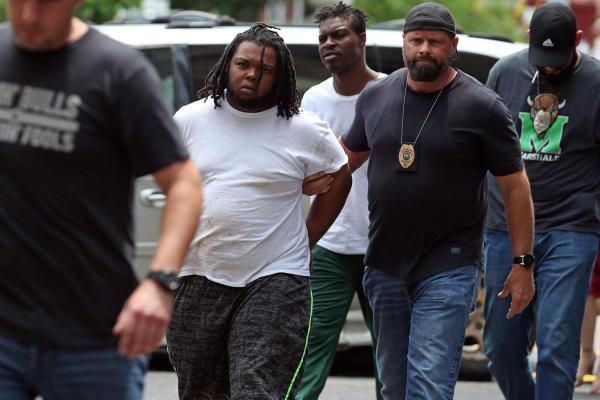 Clark and Wilson were arrested after officers served a search warrant at 1235 25th St. During a search of the residence, detectives found approximately 63 grams of heroin; approximately 2 kilograms of methamphetamine, which has a street value of more than $200,000; a gun; numerous cellphones; scales; and paraphernalia used to process and sell drugs. A vehicle was also seized at the residence.

The property owner will be issued a nuisance letter for the criminal activity. Additional arrests are expected.

Prude was in possession of false identification with the name Imon Chakraborty.

During the execution of the warrant, Prude was told to turn around and display his hands. Instead, he showed his hands but did not turn around, and began to attempt to speak with investigators, according to the criminal complaint. Prude was given multiple commands to turn around and he did not, according to police. He then moved behind a couch where his lower body could not be seen by officers, then went to his knees against investigators' orders. Officers approached and forcibly placed him on the ground. Once escorted outside, the criminal complaint alleges Prude continued to be defiant and argumentative, once again having to be forcibly taken to the ground.

All three men are housed at the Western Regional Jail in Barboursville. Clark and Wilson were given $100,000 cash-only bonds, while Prude's is $105,000 cash only.