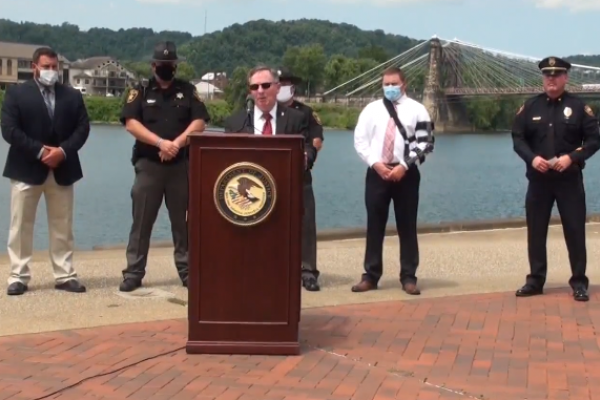 WHEELING, WVa. – Residents of multiple states were arrested today after being charged in a 50-count indictment involving a drug conspiracy, U.S. Attorney Bill Powell announced today in a press release.

The indictment charges 26 people in a drug distribution operation that sold cocaine base, also known as “crack,” heroin, methamphetamine, including “ice,” and fentanyl in Ohio County and elsewhere from February 2019 to August 2020.

Those arrested today and charged are:

Fourteen others are charged and still at large. Their names are not being released at this time.

“We are sending a strong message to all of those from other states who want to sell drugs in our neighborhoods. We will not tolerate the poison and violence. The residents and business owners on Wheeling Island and the City of Wheeling deserve to live, work, and recreate in a safe neighborhood,” said Powell.

“The dedicated men and women of the Drug Enforcement Administration are committed to stopping the flow of drugs and violence into West Virginia and bringing to justice those who seek to poison our communities and threaten the safety of our residents,” said Special Agent in Charge Todd Scott, of DEA’s Louisville Division. “Violence and drug crime know no borders; we will find you, wherever you are, and put you behind bars,” added Scott.

The government is seeking forfeiture of more than $21,000 in cash and multiple firearms associated with the alleged crimes.