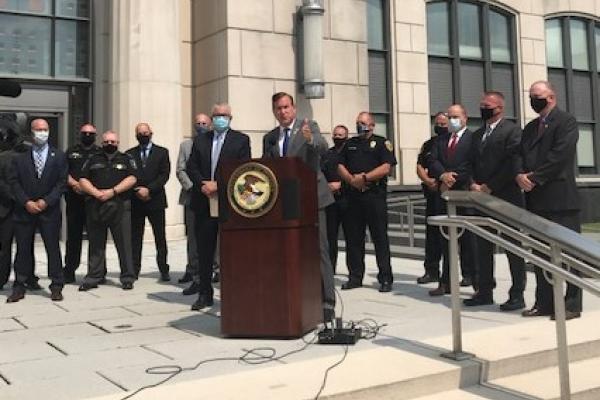 CHARLESTON, W.Va. - United States Attorney Mike Stuart today announced the takedown of a drug trafficking organization (DTO) responsible for distributing meth, heroin and marijuana in Kanawha and Fayette Counties. The takedown is the result of a long-term investigation, dubbed “Second Wave,” led by the Federal Bureau of Investigation (FBI) and the Central West Virginia Drug Task Force (CWVDTF). A federal grand jury returned two indictments charging 12 individuals in connection with their roles in the DTO.

“Meth. Heroin. Marijuana. The takedown of this network of drug dealers is another major victory for the people of West Virginia,” said United States Attorney Mike Stuart. “Long-term targets. Long-term problems. A drug trafficking organization that was fueling terrible addiction, pain, chaos and despair is now shut down. The people of Kanawha and Fayette counties are certainly safer as a result of today’s arrests. I commend our many federal, state and local law enforcement partners for their remarkable work in this long-term investigation. I am proud of our law enforcement leadership at every level throughout West Virginia but I want to specifically thank the men and women that serve on the front lines of law enforcement across this great state. Taking down a major drug trafficking organization is difficult and dangerous work. My hat is off to each of you. I pray for your safety each night. Thank you for your commitment to the people of West Virginia and the Rule of Law. This is another great day for the people of West Virginia.”

“The group of people arrested today have been a menace in our communities for too long,” said FBI Pittsburgh Special Agent in Charge Michael Christman. “Today’s takedown sends a strong message to not only this community, but other drug organizations who think they can do business here. The FBI and our law enforcement partners will not tolerate this activity. Operations like this are made more difficult without strong partnerships, and I commend the joint efforts by the ATF, U.S. Postal Inspection Service, Central WV Drug Task Force and MDENT."

Earlier this week, defendant Larry Martin’s sister, Brandi Martin, was sentenced in federal court to 188 months in prison for possession with intent to distribute methamphetamine.

In a separate indictment, Gregory Eugene Woods, 43, of St. Albans, was charged with possession with intent to distribute a quantity of cocaine. Two additional defendants, Sammy Joe Fragale, Sr., also known as Joe, and Sammy Joe Fragale, Jr., also known as Bubby, were arrested on a federal criminal complaint for conspiracy to distribute methamphetamine.

The investigation was part of the Department of Justice’s Organized Crime Drug Enforcement Task Force (OCDETF). OCDETF was established in 1982 to conduct comprehensive, multilevel attacks on major drug trafficking and money laundering organizations and is the keystone of the Department of Justice’s drug reduction strategy. Today, OCDETF combines the resources and expertise of its member federal agencies in cooperation with state and local law enforcement. The principal mission of the OCDETF program is to identify, disrupt, and dismantle the most serious drug trafficking organizations, transnational criminal organizations, and money laundering organizations that present a significant threat to the public safety, economic, or national security of the United States.

Please note: An indictment is merely an allegation and the defendants are presumed innocent unless and until proven guilty beyond a reasonable doubt in a court of law.