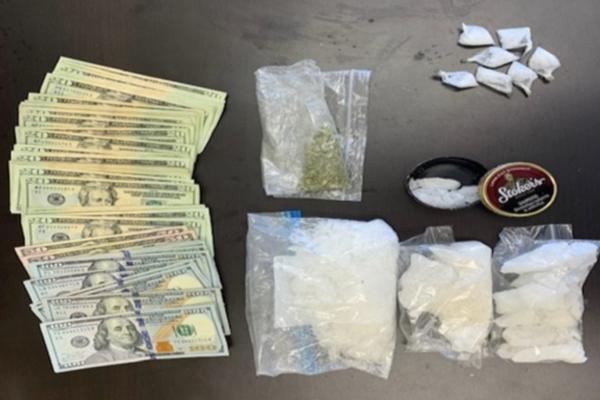 On Wednesday, April 14, 2021, members of the Appalachia Narcotics Investigations executed a search warrant on Kentucky Avenue in Pineville, Ky that yielded approximately one pound of crystal meth, a small amount of marijuana and over $1,000 in cash. The search warrant was a result of an ongoing investigation by ANI as well as information received by Officer Brandon Hollingsworth of the Pineville Police Department.

Arrested by Officer Brandon Hollingworth was 58-year-old Gary Wilson, of Pineville. Wilson was lodged in the Bell County Detention Center charged with Trafficking in a Controlled Substance, 1st Degree and Trafficking in Marijuana.

Assisting at the scene were Sergeant Patrick Brooks of the Bell County Sheriff’s Office and Officer Justin Patterson and Police Chief Kyle Dunn with the Pineville Police Department. This case is ongoing and will be investigated further by ANI.

This is one of three arrests for Gary Wilson since December of last year for similar charges.

On December 29, 2020 he was arrested by Bell County K-9 Deputy Adam Southern after being found with another man in possession of over 148 grams of Methamphetamine along with Suboxone, a bag of Marijuana, digital scales, distribution baggies, and drug paraphernalia. He had been released on bond on January 2, 2021 for those charges.

Two weeks later on Wednesday January 13th, Officer Hollingsworth made a traffic stop on a vehicle in Pineville in which Wilson was a passenger not wearing his seat belt. Wilson was asked to exit the vehicle as the search was conducted. The officer found a red bag in the back seat of the car containing a black bag that held a clear baggie with a crystal-like substance believed to be Methamphetamine. Also found were two clear baggies with Marijuana inside the front pocket of the red bag and Wilson had $1336.00 in cash in his possession. Wilson took ownership of the bags.

At the time Gary Wilson was arrested and lodged in the Bell County Detention Center charged with trafficking in controlled substance – 1st degree, 1st offense (greater than 2 grams – Methamphetamine), and possession of Marijuana. He was released on bond for those charges on January 27th.