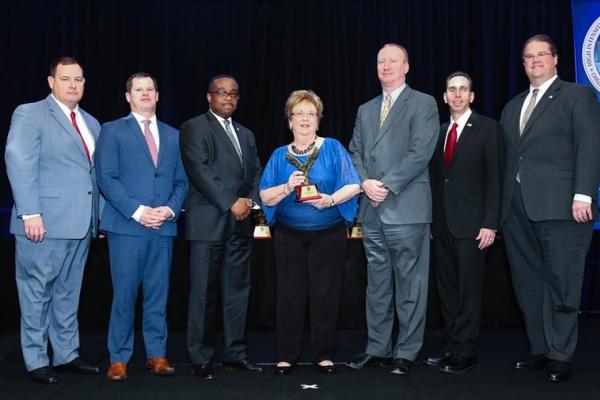 The Executive Director of the Appalachia High Intensity Drug Trafficking Area (AHIDTA), Vic Brown, has announced that Thelma Hedrick has been awarded the Mary Marshall Award for Outstanding HIDTA Support from the Office of National Drug Control Policy (ONDCP).

The High Intensity Drug Trafficking Area (HIDTA) program is administered by the Office of National Drug Control Policy (ONDCP).  A component of the Executive Office of the President, ONDCP was created by the Anti-Drug Abuse Act of 1988.  ONDCP advises the President on drug-control issues, coordinates drug-control activities and related funding across the Federal government, and produces the annual National Drug Control Strategy, which outlines the Administration’s efforts to reduce illicit drug use, manufacturing and trafficking, drug-related crime and violence, and drug-related health consequences.

Appalachia HIDTA is an important component of the President’s National Drug Control Strategy, which provided additional federal resources to help eliminate or reduce drug trafficking and its harmful consequences.  Law enforcement organizations within HIDTA assess drug trafficking problems and design specific initiatives to reduce or eliminate the production, manufacture, transportation, distribution, and chronic use of illegal drugs, as well as money laundering activities.

Ms. Hedrick is the Fiscal Agent for the Appalachia HIDTA and has been with AHIDTA since its inception in 1998.  Since the beginning of AHIDTA, Thelma has been instrumental in building the infrastructure necessary to properly administer the AHIDTA grant. Thelma has demonstrated professionalism and a commitment to the job and is recognized throughout AHIDTA for her integrity, her ethics and her resolute dedication to the AHIDTA mission.

Prior to her employment with AHIDTA, Thelma enjoyed a long and rewarding 31 year career with Sue Bennett College in London, Kentucky.  During her time there, she served in several positions including Assistant to the President and ultimately Director of Alumni Affairs.  Sue Bennett College was a bedrock institution in London.  In addition to the education that its students received, the College engaged in a wide variety of community outreach programs which enriched the lives of everyone that those programs reached.

When Ms. Hedrick saw the opportunity to be involved in a new endeavor called Appalachia HIDTA, she took it.  In the beginning, she had no desk and no office.  She made copies at the public library and sent faxes from an office supply store.  She worked for three months without pay as she helped to form what has since become one of the most respected and successful HIDTA offices in the country.

One manager said of Thelma Hedrick, “If we had a few dozen Thelma’s, there is no limit to what we could accomplish.”  But, there is only one Thelma.  Fortunately for the AHIDTA, she is ours.