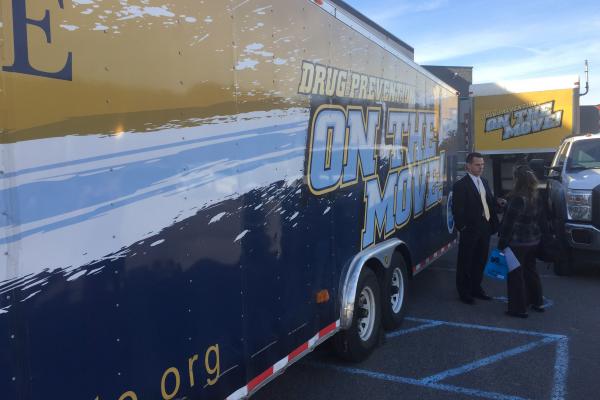 CLARKSBURG, W.Va. — This week, students in Harrison County were among the first in the state to participate in a substance abuse awareness initiative aimed at educating children throughout Appalachia.

“On The Move” is an interactive mobile classroom where students learning about the effects of various drugs on the body and brain while answering questions electronically. Those who participate will also get the chance to experience the dangers of distracted and impaired with a specialty go-kart and other technology.

“We really can’t arrest ourselves out of this situation now. While we still have a very, very strong law enforcement presence, we realize that we have to go over into prevention and we also collaborate with treatment professionals.”

The program originated from Operation UNITE out of a Kentucky though a partnership with Appalachia HIDTA and the Kentucky National Guard.

The U.S. Attorney for the Northern District knew it was something needed in West Virginia.

“I was sort of the squeaky wheel that got the grease, I think, because I knew that this trailer had come to other counties within the Appalachia HIDTA region,” Bill Ihlenfeld said. “I kept asking, asking and asking and finally they said ‘Okay, we’re coming. Where should we go first’ and we suggested that the trailer should come to Harrison County.”

Besides being one of the largest counties with a HIDTA designation, Ihlenfeld said it was one of the more diverse in terms of demographic, making it advantageous to their research.

Before coming in, students in the 7th through 10th grade audience fill out an anonymous pretest pertaining to their knowledge of drugs and their effects to be sent off to researchers at the University of Kentucky.

After the program is over, the students take another test to see how effective the lessons were and how prevention programming should be planned in the future.

“I think they’re going to get some really valuable data as to what’s happening in North Central West Virginia, not just Harrison County but this whole region,” Ihlenfeld said. “That’s valuable to all of us. We need to know what’s going on to make sure we’re responding in the right way.”

The program was held at Liberty High School on Tuesday, Robert C. Byrd High on Wednesday and planed to visit Lincoln and South Harrison High School before the week’s end.

Mark Manchin, Superintendent of Schools in Harrison County, said they will run with these lessons and continually expand on them.

“I don’t think you ever quit, I think every time that we have an opportunity like today. You see all these people here, you see the people that are trying to make our society, our school system better. I’m just glad to be a part of it, I’m glad we had the opportunity to facilitate this.”

“On The Move” has put other counties in West Virginia on a list for a visit, with the next one hoping to occur in the spring.