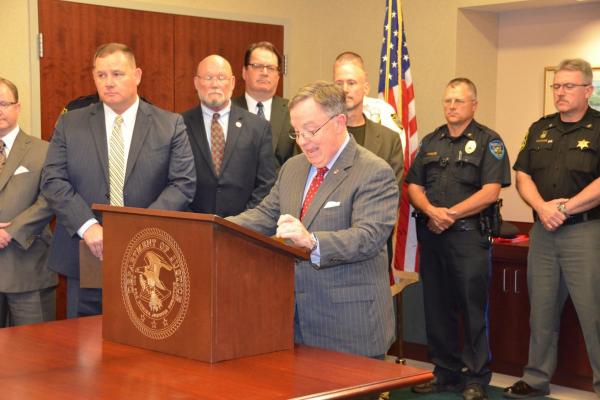 WHEELING — A total of 31 people from West Virginia and Ohio have been indicted in connection with a drug distribution operation running in Wetzel and Tyler counties.

Bill Powell, U.S. Attorney for the Northern District of West Virginia, said Tuesday that 23 indictments were returned by a federal grand jury in Wheeling June 5 in connection to an operation distributing methamphetamine, cocaine and heroin.

"These indictments demonstrate our continued efforts to aggressively prosecute those who consider West Virginia as a viable market to distribute their poison," Powell said. "We are seeing increased trafficking of methamphetamine, which also brings increased violence. Thanks to our prosecution team, and the incredible efforts of our law enforcement partners, these indictments were returned.

"The cases are now on the path for a final resolution. Our mission to keep our communities safe remains paramount."

Powell said the alleged drug operation involved trafficking the drugs to West Virginia from Columbus, Ohio, which were obtained from as far away as Atlanta, Georgia. In addition to these charges, some of the indicted also face weapons charges.

Indictments are merely accusations and all defendants are presumed innocent unless and until they are proven guilty.

Also in connection with the same trafficking operation, eight others, all residents of Ohio, were indicted by a federal grand jury in Wheeling April 5. The eight are suspected members or associates of a street gang called the “Elaine Crip Family,” Powell said.