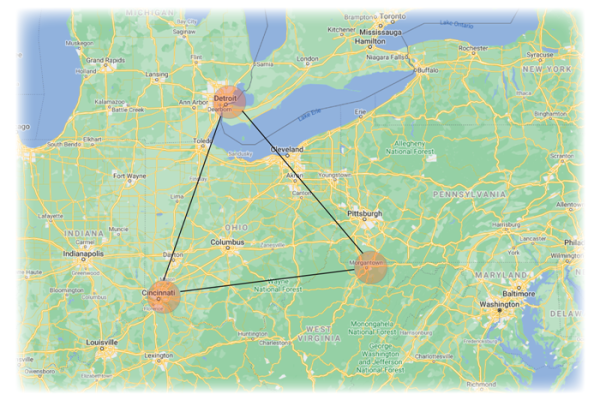 From October of 2020 to February of this year investigators tallied 35 counts of selling dangerous drugs and ensnared eight people from the Detroit, Michigan area, one from Hamilton, Ohio and two Morgantown residents.

“And it’s no coincidence I believe, that as we have the increase of drugs that have been trafficked from Detroit, particularly fentanyl, so too we have seen an increase in the deaths of our citizens,” Bernard said.

Bernard praised the efforts of police departments in Granville and Morgantown, WVU Police, the Monongalia County Sheriff’s Department, the Drug Enforcement Agency, FBI and the Monongalia County Prosecutor’s Office. Federal agents in Cincinnati and Detroit also assisted with the investigation.

“One individual may get arrested, but we find the very next day or shortly thereafter there’s information that another person has taken up business for that individual,” Bernard said. “So, that’s how these investigations including this one began.”

The 35-count indictment shows the drug transactions ranged from $60 to $500.

“I do think we’re making a difference interdicting these drugs locally,” Bernard said. “Nationally, I’m hoping this will spread out and we can make a better effort stopping these drugs from crossing our borders.”

Morgantown Chief of Police Eric Powell said the goal of these operations is to remove dangerous drugs and the poepl who sell them from the street, but also sends a message to people who might consider selling drugs and the public.

” It sends a message to the people out there who might be thinking about doing it,” Powell said. ” It also sends a clear message to the public that we’re doing what we need to do to get these drugs off the street.”

This is an ongoing investigation.