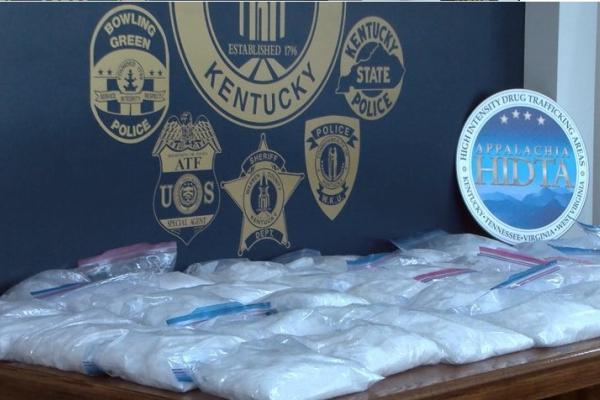 “This is the largest seizure of Crystal methamphetamine ever in warren county. I think about a year and a half, two years ago we had a case that just recently settled in federal court where we seized 44 pounds of crystal meth, so it’s almost double that,” said Tommy Loving, Director of the Drug Task Force.

Brandon Trent, 24, was charged with first-degree trafficking in a controlled substance.

This had been an ongoing investigation and the force had developed information of a potential load of narcotics headed North towards Bowling Green.

“We have certainly over the past two or three years, particularly since the border is more porous now , seen a huge increase in crystal meth and fentanyl coming into the area,” said Loving.

Authorities were able to locate the vehicle entering Kentucky and initiated a traffic stop just inside Warren County where the driver chose not to stop and participated in a three mile pursuit.

Law enforcement said they made the arrests without further resistance.

“Anytime you can stop 80 pounds of crystal meth from hitting the streets of Bowling Green- that’s certainly a good thing. It actually saves lives,” said Loving.

The investigation is ongoing and both Raby and Trent remain housed in the Warren County Detention Center.