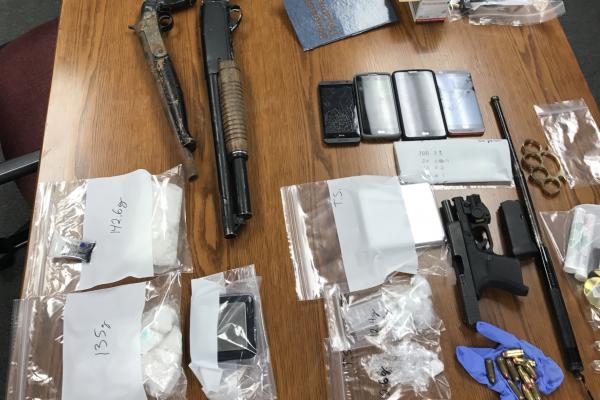 A Bowling Green man facing multiple drug trafficking and weapons charges is set to appear in federal court next week.

The charges against Mitchell resulted from an investigation by the Bowling Green-Warren County Drug Task Force, which executed a state search warrant March 1 at Mitchell’s residence on Audley Avenue.

No one was in the residence when law enforcement entered. Officers found a loaded handgun, marijuana, various pills and drug paraphernalia, plus a locked safe in the bedroom closet, according to a federal criminal complaint.

As the officers executed the search warrant, they saw Mitchell drive by the residence.

A Bowling Green Police Department officer stopped Mitchell and detained him after smelling a strong odor of marijuana from inside the vehicle, according to the criminal complaint.

A search of the vehicle revealed a loaded pistol, about 19.7 grams of crystal meth, 2.6 grams of cocaine and marijuana.

Mitchell was informed of the search warrant being executed at his residence and was brought back there, where he was asked for the combination to the safe.

After providing the combination, Mitchell was allowed inside to use the bathroom, telling police as he left “I am done when they open the safe,” according to the criminal complaint.

“Officers opened the safe and located approximately 142.6 grams of crystal meth and approximately 135 grams of cocaine,” stated the complaint, filed by Special Agent David Hayes of the federal Bureau of Alcohol, Tobacco, Firearms and Explosives. “Officers also located two sawed-off shotguns in the hall closet of the residence.”

Mitchell told police that both shotguns belonged to his father, and later said the weapons had been dropped off at the residence by his brother, court records show.

During an interview at the drug task force headquarters, Mitchell said he had recently purchased about 8 ounces of crystal meth and provided the amounts he paid for that and the cocaine, according to the complaint.

Mitchell was convicted in Tennessee in 2008 for trafficking in cocaine and sentenced to six years in prison.

He is set to be arraigned Wednesday in U.S. District Court in Bowling Green before U.S. Magistrate Judge Brent Brennenstuhl.